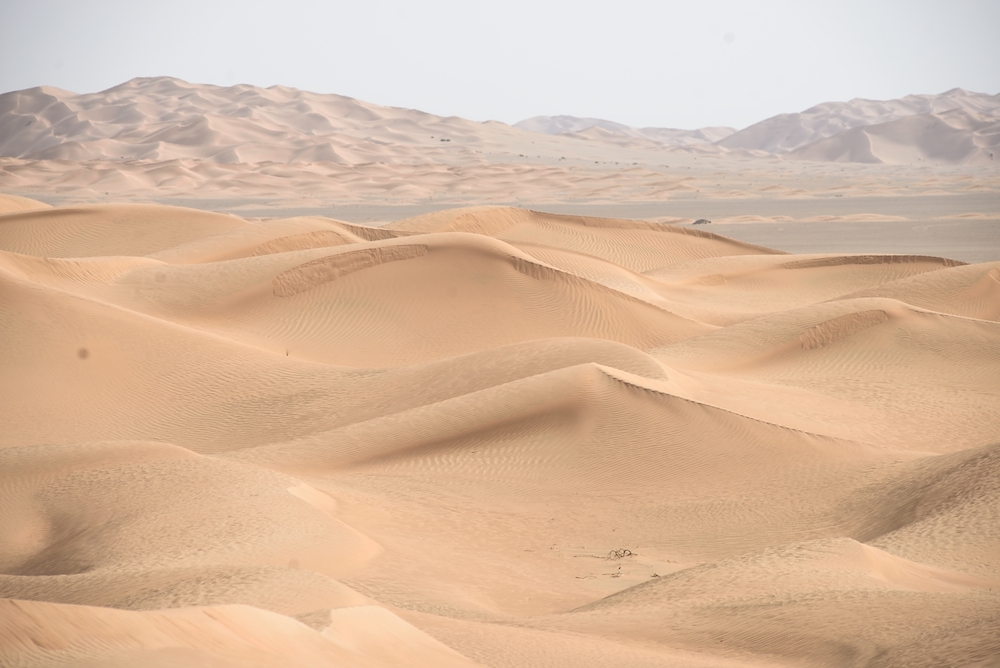 Reconnaissance before the November trip

Like every year, before we move with the groups of 4x4 fans into Omani interior I'm preparing the “road-book” and checking potential locations for the campings. Last few days I was off due to the “Eid” vacation and I've got five days only for myself. Without hesitation, I decided to go far away from a capital town. I aimed to visit some interesting locations, including the Empty Quarter. There was just one issue. I was alone and  trip to the biggest sand desert in the World, in one car, is not a good idea. I had to find some compromise between that fact and travel safety. The plan was simple. I will not go deeper then 10 km from the last humans settlement. 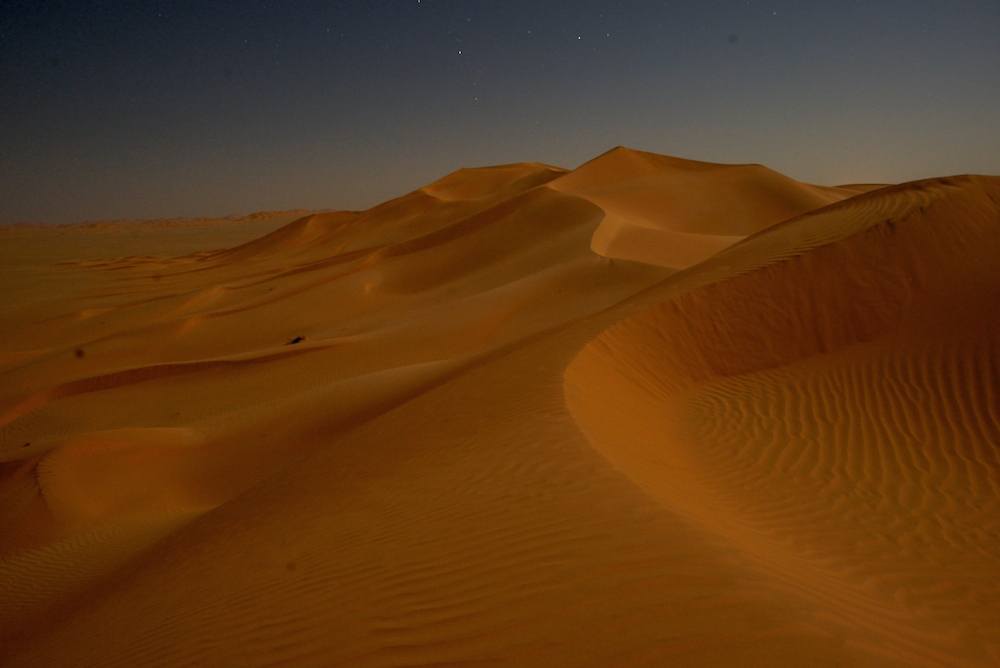 There is one particular part of Empty Quarter which I admire very much, Ramlat Hashman. The huge complex of the high dunes located only 1000 km from Muscat. Equipped with water, food and other stuff and, what is always important - experience, I set off into the desert. 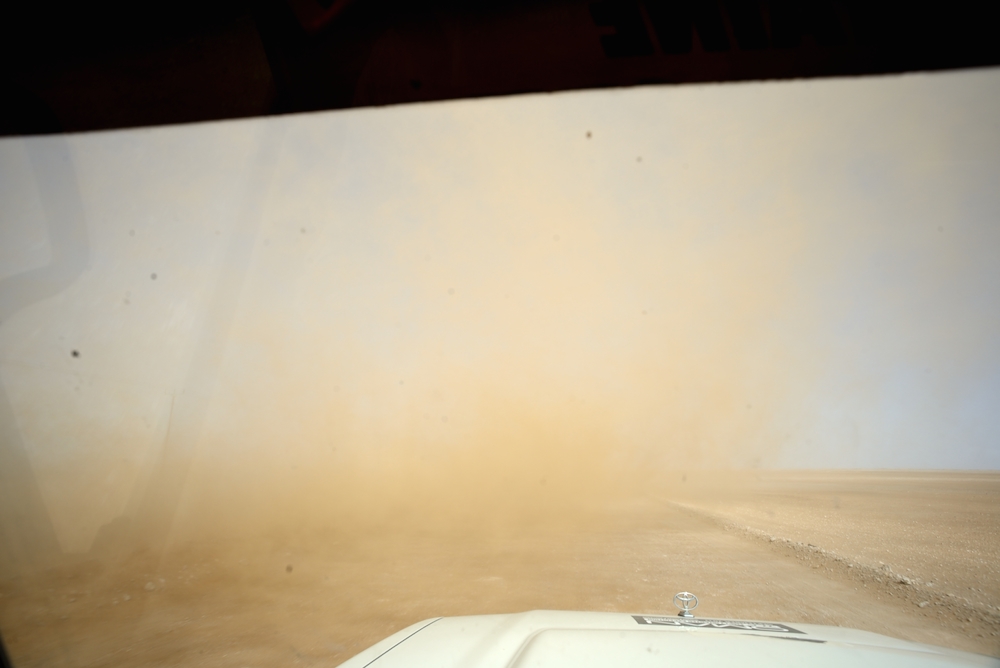 I reached the last petrol station late afternoon. My Pakistani friend who recognising me every time, when I stop there, refuelled my car. I had 140 litres of petrol, that should be enough for short day trip. 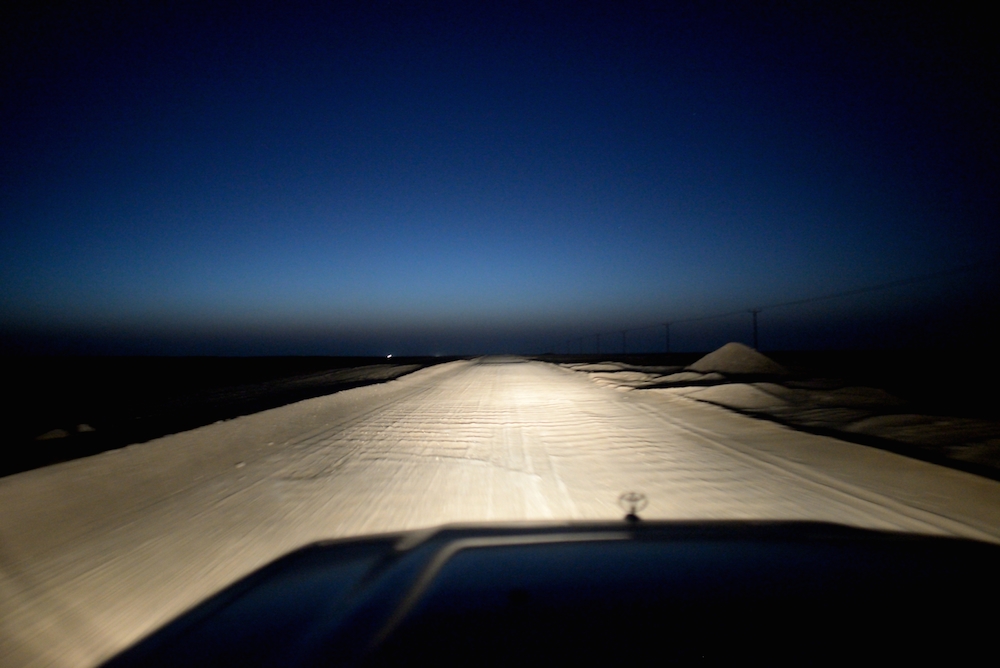 During the twilight, I returned on the main sandy track leading me directly to the massive dunes on Ramlat Hashman. 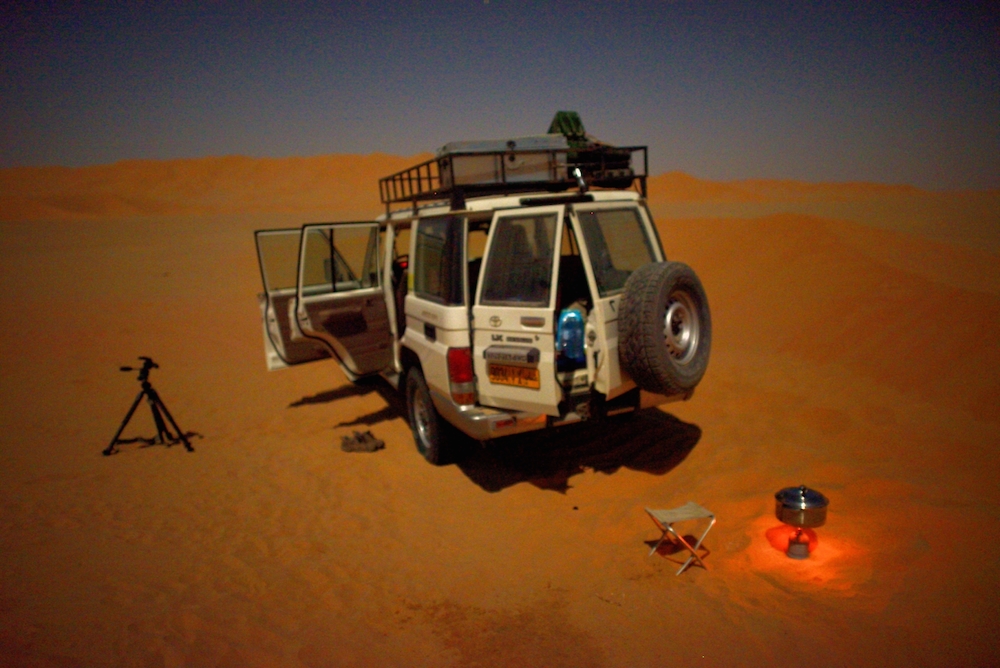 Around an hour later, I pulled over my car behind the big dune. The silence was absolutely incredible. The night was special. Full-moon made all “sandscape” very bright. I grabbed my camera and along with Trop moved on the top of the dune to capture some shots. Like every time, when I experience being on the Empty Quarter, I have an impression to be overwhelmed by this powerful nature. After around half an hour, I got back to the car.

I was very hungry and Trop implied that small bowl before sleeping would be a great idea!

We prepare our signature dish - “The dessert risotto” - contained only the white rise along with the smoked tuna. After small supper Trop went sleep just on the sand next to the car. 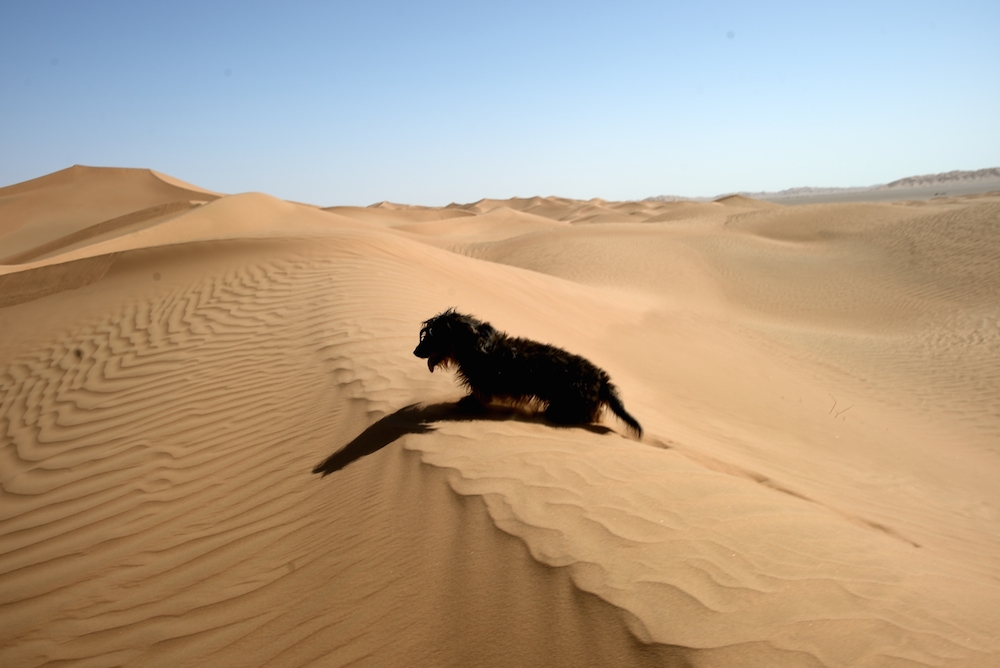 In the middle of the day, I covered 10 kilometres distance when suddenly my car stuck into the sands. I tried to use low gear but nothing happened. The car was glued to the sand even more. Now I was sure, that next hours, I will get some exercises with the shovel.

Indeed, next two hours, I tried to recover my car. In the middle of the day it was almost 40 centigrades and wind was much stronger. It looked like a small sand storm is coming.

Bitten by the heat and struggled with the hot sands, finally, I recover my car from the sand and I could continue my exploration. The sand storm spoiled my photographic plans. Blowing wind and sand in the air, effectively covered everything. I slowly moved back to the main track. 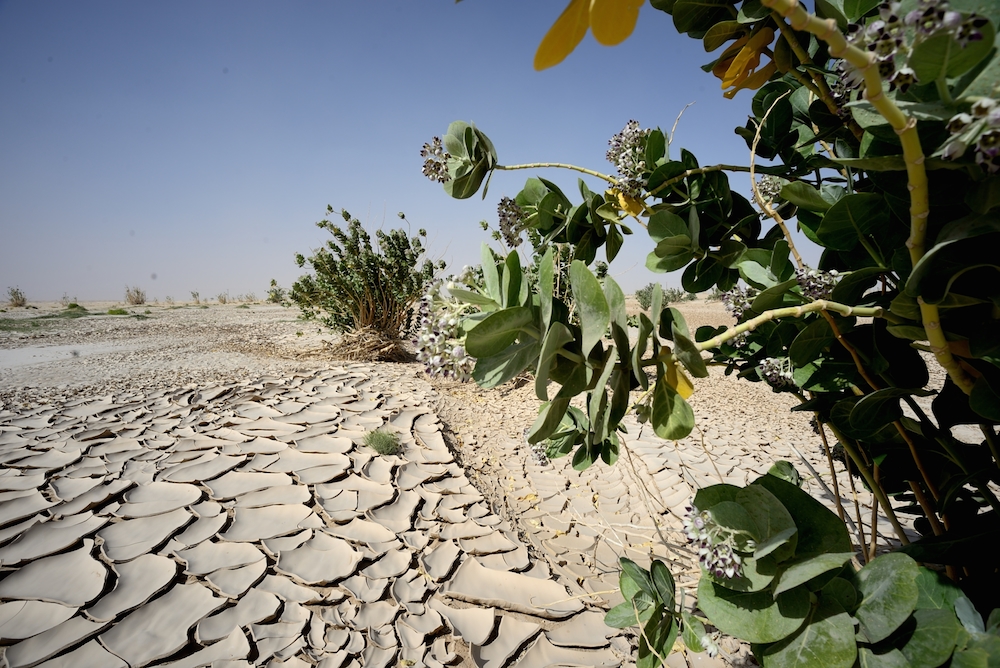 Around an hour an a half later, I pulled over my car again, in the wide wadi around 30 kilometres from the dunes of Ramlat Hashman. This is the only one place in the entire region, where I could see more greens. The wadi periodically is covered by the water. 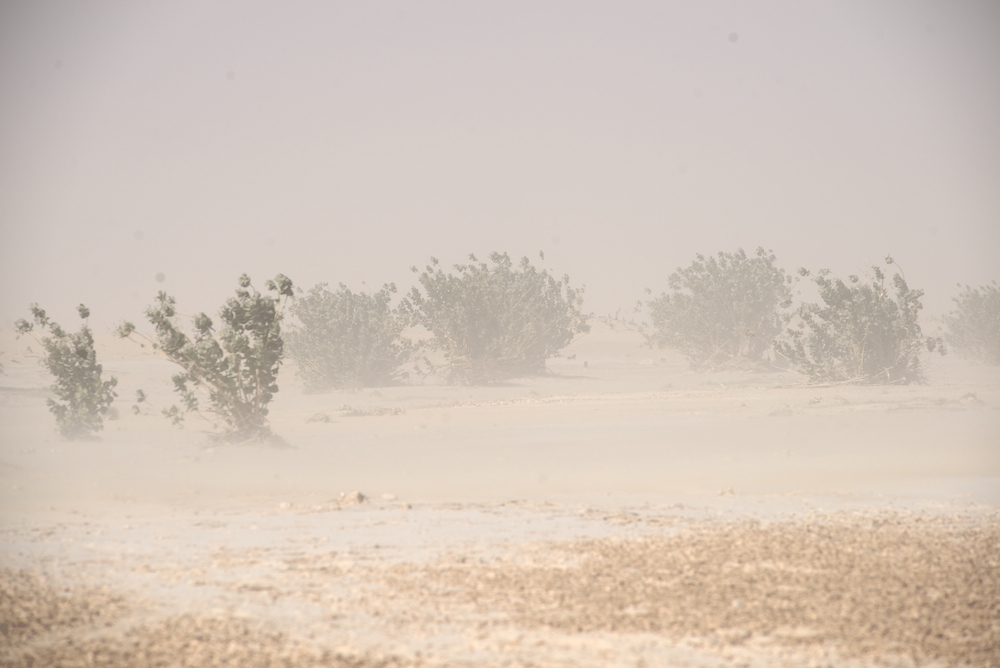 The wind was still blowing strongly and sand covered the landscape.  The weather was very moody... 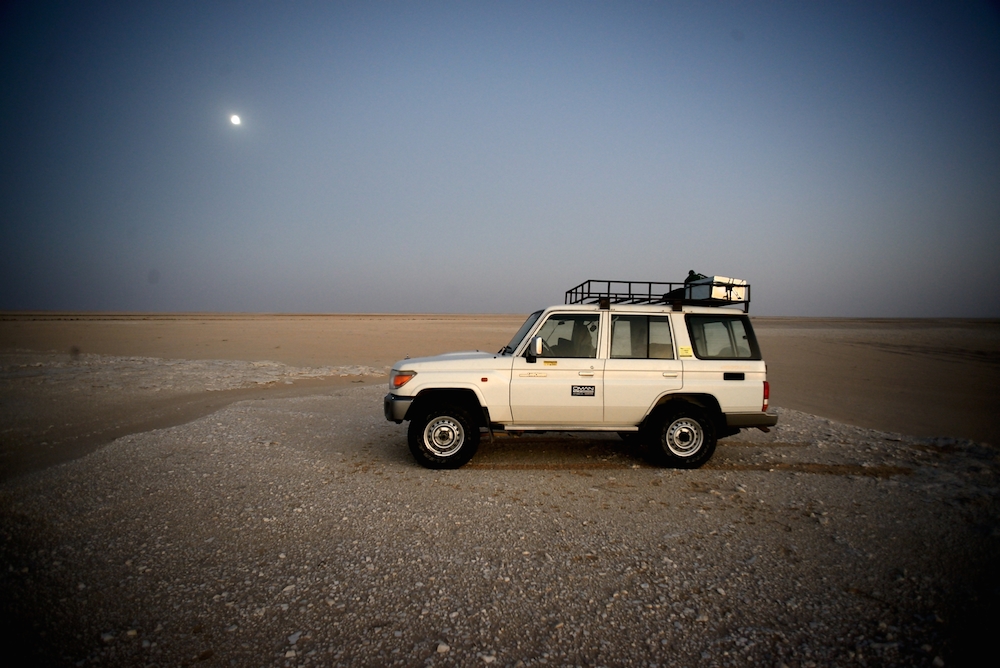 I got back to the service station, where I started my trip a day before, and refuelled my car again. I the evening, I found a place for a next camping for the night.  This time I was the biggest landmark on the horizon, I choose to spend the night on the most flat part of Oman.

Next day, I turned toward to “Cinnamon Desert” and beautiful white sand dunes, where I found perfect location for the November trip.